The other night my lovely wife E and I were taking in the open mic night at Karma (a very cool little art house bar in Calgary's uber-hip Marda Loop) when some muscle bound tool--wait, I'm getting ahead of myself--when some guy with a crew cut came in with his girlfriend hanging off of his arm. Did I mention he was wearing a medal.
Out to the bar.
A medal.
Around his pickle barrel neck.

I was dying to know: 1) what the medal was for?; and 2) what on Earth possessed him to wear it to a bar?

Thankfully beer has always provided me with enough courage to be so brazen as to ask strangers wearing medals exactly what I should be celebrating them for, and this evening was no different. The owner of the bar was sitting nearby our "hero" and I stopped to ask him if he knew why A was all glamed up in gold medalions. He didn't, but shared my thirst for knowledge and encouraged me to go forth and ask.

With so many people counting on me, I plunged into A very intimate conversation with his girlfriend, G, and asked:

Men are not created equal.

I have made a number of new friends out here in Cowtown; some of them totally awesome, and some of them opened their conversation with me like this:

S- "Hey Brad! Good to meet you! I just got done directing some porn--sorry I'm a little late."

He wasn't late at all.
Some segue.

S then went on to describe to me how to win a fight in a pool hall, as he had done, by using a splintered pool cue to break a man's collar bone. Or bones. He made two karate chop motions, so he must have really done a number on the guy.

He was also with John Lennon the day he got his hair cut when the Beatles broke up. And introduced Rock and Roll to Denmark. Yes. The whole country.

There will, no doubt, be more to say about S in the future.

There's a worm in my Apple.

So. . .my beloved iBook Gord has been sick, as I have mentioned.
Well, last night, while performing a simple work exercise to get it back into shape, my little buddy expired. There were no friends or loved ones at his deskside during the final moments. He was discovered by a technician this morning who quietly folded down the screen and unplugged Gord's power cord.
Then I received a telephone call, one that no computer owner ever wants to get, informing me of little Gordy's passing.
The Tech could have at least drove a black Cadillac over to tell me.

This final, gruesome, turn of events follows close on the heels of a phone call I made to Apple Canada to complain that FileVault was the reason why my iBook had been so sick. The end of the phone call:

A- ". . .so, it's a software problem, and if you recall in your agreement, software is not Apple's responsibility. We would recommend you not use FileVault, as there are issues with that programme."
B- "I realise that. Everyone is telling me that I shouldn't use FileVault. Why is it on the bloody computer if Apple is advising me not to use it?"
A- "In some situations it is an appropriate application."
B- "Do you guys use it in the office?"
A- ". . .no. We've been advised not to."
B- "Aha. So, can Apple do anything to compensate me for the large service bill I'm about to get?"
A- "As I said, I'm sorry, but Apple doesn't cover software issues."
B- ". . .so, you're telling me, basically, to go sit on a tack?"
A- ". . .um. . .I guess."

So now, as the second month of B's Computerless Existence begins, Apple agrees with my boiling down of the situation, and THANK GOODNESS all that is left in my home office is tacks!
The guys at MyMacDealer in Calgary have been fantastic, mind you. It is through their diligence that the hard drive fault was discovered. Some time next week Gordy should be reincarnated into Robogord. Rebuilt. Better than before. Part Gord. Part warranty hard drive. All mine.
Posted by B at 1/13/2006 3 comments:

Put seat in the upright position.

My computer has been in the computer hospital since December 16th.

The delay is not the computer's fault; the blame for this protracted illness lies solely upon the shoulders of my certified Mac service team member, S.

In the middle of dinner I had a pretty serious lapse of wits and suddenly dropped my fork and reached down to my lap to fasten my seat belt. E wasn't quite sure what the hell I was up to, and to tell you the truth, neither was I. I regained my senses in the middle of searching the bar's bench seat for my lap belt just in time to see my wife quietly asking herself if she made the right choice in marrying me this past October.

Why it happened? I can't say. The Smokey Chili Cajun Chicken Something-or-Other wasn't that awesome.
In fact, it wasn't awesome at all. The only thing I can think of, is that the bar's bench seat reminded me of the bench seat in my new ride--a '68 Chevy.
So sexy. Dual chrome exhaust. 350 Engine. AM/FM radio. We're thinking of calling it: Betsy (E's choice); Lucky (B's choice); or Betty (our compromise). Any feedback would certainly be appreciated. 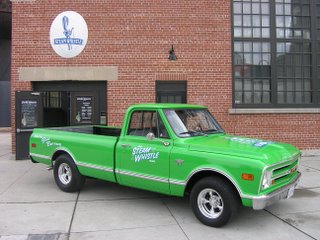