My mother has dressed up our poor poodle again.

As the 'Queen Bee' of her Red Hatters posse, she figured that it was selfish to hog up all the fun for herself, and therefore conscripted the dog. 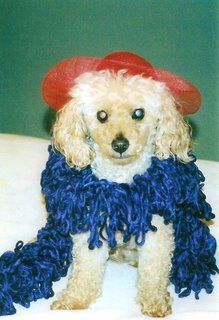 My Mother, clearly still working through some Empty Nest Depression issues, persists in dressing up our senile toy poodle Kelsey like a mammalian Barbie--even though, at 98 (in dog years) he is the most senior member of our family. 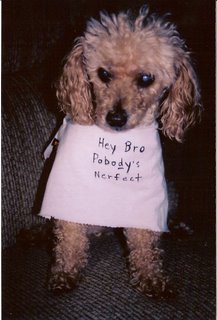 Deep in his eyes, it seems K is thinking, "It ain't easy being apricot."

My Mother, as an added dig to me, corrected the mistake I made with my D in "Pobody's"; she printed the D right way round (instead of my abysmal spelling performance on my own shirt, where the D was featured backwards).

My brother, C, and I are using this as the high water mark in our own mild elder-abuse, when the time comes. I am particularly excited to put a radio controlled squiring flower on Pop's lapel which I can control at family functions.

For Mumsey, because of the affront to my own ego, will get the radio controlled whoopie cushion (although she likely won't need it).

I do, however, like the inclusion of the expression, "Hey bro!". It paints pictures in my mind that Kelsey really rocks the apricot afro when he's out with the neighbourhood pooches.
Posted by B at 9/17/2006 1 comment:

It's good to be back in Toronto. . . even just for a day or two! One truly forgets the charms that only Hogtown can offer!

In fact, I'd almost forgot what it was like to have a confrontation with drunks, hobos, and drunk hobos.
Almost.

Waiting outside the Gladstone two nights back, after a dear friend's birthday left me out past last call waiting on the Queen Street Vomit Comet to Etobismoke, I overheard a panhandling hobo ask one of my fellow commuters for spare change. The fellow commuter, a drunk punk with his own copy of Fubar at home in the VCR, told my hobo friend that he would give him two dollars if, and ONLY if, the hobo would give me the bag he was holding.

The Drunk Punk didn't call me by name, and even though I wasn't looking at him I knew it was me to which he had directed the hobo--there weren't many options at the streetcar stop. I also knew that the "present" being delivered, by special request, was a bag of garbage generated by his falafel, and tied with a bow. At the moment, I was wasn't in the market for a fresh bag of garbage--I had a feeling that I was going to get pissed off in 3. . . 2. . . 1 . . .

There was only one dude enjoying this, and it wasn't me, and it sure wasn't the hobo.

H- (under his breath, more urgent)"Take it!"
B- "No."(to the Punk)"Hey! Tell you what--I'll take your happy fun party bag if you accept a bag of broken nuts."
P- "What's that? A bag of broken nuts?"
B- "I'll show you--Come within an arm's length of me and I'm going to punch you in the testicles. That's a bag of broken nuts! Have we got a deal, Pal?"

I have no idea what inspired me to say the word "testicles"; nor do I truly understand why my mind automatically went to socking this prick in the nuts. The only thing I can figure is that I was trying to follow the "bag" theme, and a scrotum was the closest bag to which I could apply violence to; but once the words had left my mouth, we all had to live in this new world I had created.

The hobo and the punk smiled blankly, and there was a moment of silence as we all tried to figure out a go-forward point. The hobo was first to act: he dropped the so-called 'happy fun party bag' at my feet and took a few steps back. Then the punk turned to him, told him that he hadn't done the job according to his wishes and therefore only got one dollar (which he threw on the ground). The hobo grabbed the discarded loonie and got the hell out of Dodge.

I said nothing.
I had already said enough, in my opinion, seeing as no one was speaking to me any longer.

With a sigh, I went back to waiting for the streetcar.

I think "testicles" sounded too clinical to be threatening; if I had a Mulligan, I think I would choose "balls".
Posted by B at 9/03/2006 2 comments: