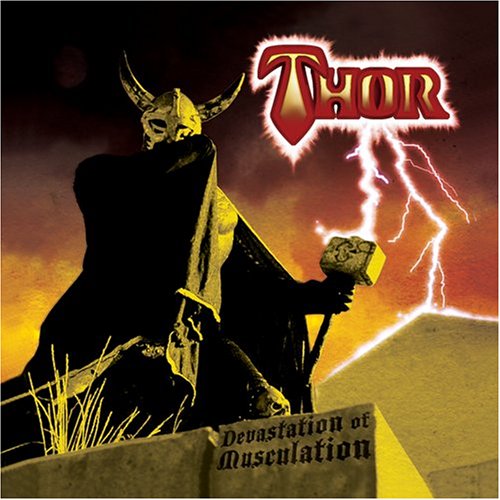 What, pray tell, is it to be devastated by musculation?

To answer that most unlikely of questions I went personally to have a Thor sighting at Broken City here in Calgary a month or so back.
I got in for free, and I don't think that I got my money's worth.

How Thor went from this:

. . . is between him and Ronald MacDonald--but the fact that Thor now tries to cover up his bowl full of jelly vis-a-vie a poorly-fitted latex breast plate (subtly accented with heroic chiseled abs)--speaks to the delusional mind now controlling our faded Glam Rock God who likely also still believes that he can sing.
Thor can barely draw enough breath to feed his brain, let alone carry a note.

But we all have fallen heros, and I wasn't above getting my photo taken with Thor. . . 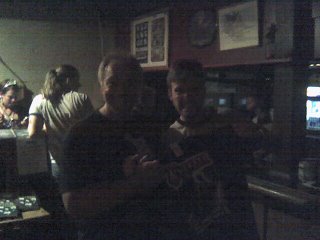 He smelt not unlike boiled skunk assholes, and that un-Godly funk transferred to me after our man-hug was completed. I now smelt so bad that, rather than shower, I wanted to set myself on fire.

I bought a concert tee anyway. I wanted to have something from the concert tour Thor died on.

And NO FEATS OF STRENGTH! What the fuck!

I went to see him bend some steel! Blow up a hot water bottle! Tear a phone book in half--something! Anything!!
We mere mortals have come to expect these things from our Glam Rock God!
What we were treated to do was an endless parade of latex masks gleaned from some Dungeons & Dragons nerd's jerkoff sketchbook, and Aliens movies; and a never-ending barrage of references to his younger, studlier days spent boning chicks on the set of "Rock 'n' Roll Nightmare".