"Do you heart Alberta beef, punk?"

My brother-in-law J was in town visiting and I decided there was no better way to get him into an 'Alberta state of mind' than to take him shooting. 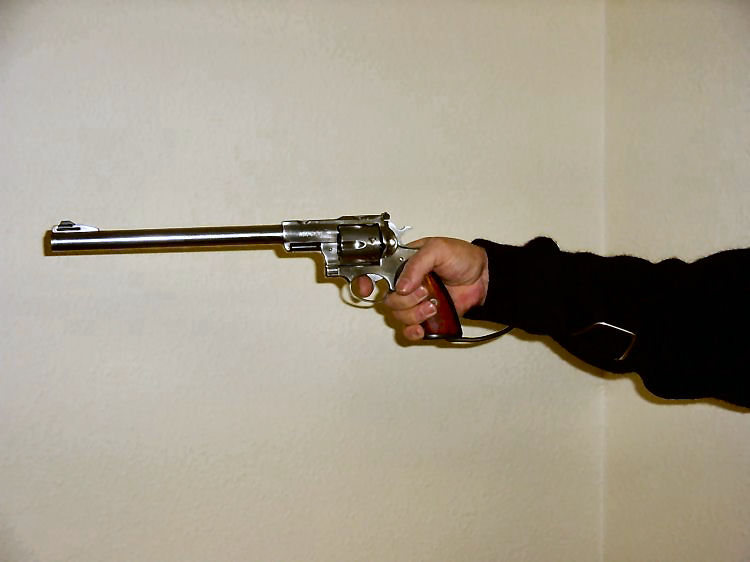 Now try to keep your socks on, my old Ontario friends! Don't go thinking that I'm going to take the scotch off my deer hoof gun rack, take the rack off the wall, and mount it in the back window of my pick up; I'm not there. . . yet. I just wanted to show him something distinctly Western that didn't involve 'Brokeback Mountin' or throwing all my recyclables in the garbage. And since he's over 19 the thrill of a lower age of majority in the province (18 years) was lost on him--so shooting it was.

While waiting to get our guns, but after we had signed a waiver stating that, in the event we face the guns anywhere but down the shooting range, we release "The Shooting Edge" from any legal liability if they take us out. Dudes wear sidearms and extra clips while walking around the store. They're ready for shit to go down. Two clips worth of shit to go down. Anyway, while we're waiting this freaky looking Albino (they're all freaky looking, I suppose) starts telling some cock and bull story to the store owner:

He packed up his gun box--the Albino has to wait a day or two to collect his handgun--and his laser sight, and left. I don't think anyone knew what to say. I'm not even sure anyone wanted to say anything, just in case the Albino was listening and came back and shot us.

I was asking our 'Ranger' how business was, and he said that when Paul Martin threatened to outlaw handguns during the election, they nearly sold out of handguns. The 'Ranger' said, jokingly, "Everyone in Calgary must have a gun now. Man, we were busy!". Thanks, Paul. You've started an arms race in suburban Calgary. All I've got is a baseball bat under my bed; how am I supposed to protect myself from my neighbours? And what about the sewer gators?!?
Fuck.
Gonna have to get me a gun.
Posted by B at 2/15/2006

If you want a measure of defence against your armed neighbours, might I suggest an aluminum baseball bat (if yours isn't already)? If you have wildcat reflexes, you can at least deflect an evil-doer's bullets -- you know, WonderWoman style.