How Many Angels Can Dance on the Head of a Pin. . . worm?

Emboldened by reader enthusiasm for my personal misfortunes (ie. shitting and barfing my own trousers), I now feel comfortable enough to share something that, until now, I have harbored as a dark secret. A dark, dirty little secret.

Before I start, let me make one thing perfectly clear: I wash my hands frequently.

To my knowledge, I have never played host to small animals--and by this I mean, I have never had lice, worms, fleas, ticks, or any of the other various and sundry parasites that often afflict children and the very dirty. This was because I, by most accounts, was a tidy child. I didn't even like to play with my G.I. Joes outside, for fear of getting them dirty. In fact, the responsibility of any rough-and-tumble G.I. Joe-ing in the flower bed fell squarely on the shoulders of Recondo (Daniel M. LeClaire to the payroll department; Danny to his mother)--for C and I had found him in a sandbox, and had little respect for his already grubby appearance (don't let that winsome smile fool you--he's as dirty as they come).

And we even washed Recondo after his flower bed adventures, even though we didn't respect him--because we were meticulously clean, and we wanted things to stay that way. This is likely why the only sports I excelled at were bowling, shuffleboard, lawn darts, and debating.

Fast forward several years, and I saw myself as still relatively clean--only now occasionally sporting a mustache like Recondo's. Unfortunately, the 'stache was not the only thing I had in common with my little buddy. There was more than met the eye--I was also dirty. Dirty like the lost-and-found Recondo. Dirty like the wolf.

No wait: the wolf is hungry. I was dirty like. . . the dog.
The dog that rolls in shit when you're dog-sitting for a friend, forcing you to wash him before letting him back in your house (all the while swearing you'll never dog-sit again, and hoping that your friends bring you back a big bottle of duty-free booze). But I wasn't so obviously dirty. I was secretly dirty.
And not the secretly dirty that everyone else is, wanting to be tied down and stuff.
Secretly dirty like a filthy schoolyard child, or a hobo. . . or a lost-and-found Recondo. . . which is, I guess, where I started.

I'm dragging my heels telling you this next part, because things really take a turn for the worse . . . of my ego.

Lying in bed, not long ago, I felt an itch in my anus. Not your average, run-of-the-mill sphincter itch either; a desperate, insistent itch. An itch so urgent, that I couldn't sleep. With it also came an unsettling sensation of crawling.

I itched, and itched, and itched; but each time I stopped itching and returned to bed, the itch returned. And so did the crawling sensation.
Yes. I finally stood on the tub and examined by anus in the vanity mirror, fearful of what I might see. All I saw, however, was my pert little Ewok ass, and nothing more. Well, not nothing more--I saw the choda, my thighs, and other things--but nothing crawling. Thank Christ.

Somewhere around 4am I fell into a fitful sleep, and dreamt of a time when my ass didn't itch.

All the following day I felt fantastic--save the fatigue from lack of sleep--and maybe even did a little skipping to relish the quiet that had fallen over my anus. The itch was behind me! (yes. A pun. Hardy-har-har)

Or so I thought.

This time, the itch was so all-consuming, so intensely distracting, that I actually thought I might lose my mind. It sounds like I'm exaggerating, but I'm not. Unlike other itches that you can't scratch, or itches that are tolerable for seven years, this one was notably unpleasant.

Just what the hell was wrong with me, I didn't not know. Out of desperation, I put my faith in Google.
After washing my hands, I typed in "itchy anus night", favouring a direct query over something more eloquently worded. It was clear, within minutes, that I had pinworms. Little mother fuckers.

Knowing thy enemy is key, and now that I had a name, and a somewhat unpleasant face, I was ready to Jon Rambo the little jerks. After getting the name "Combantrin"--which seemed close enough to the word "Combat" for me to trust that it would get the job done, I called the closest Shoppers to see if they had it. I am loath to admit that, over the phone, I told a white lie without being asked:

Braving a pretty serious snow storm behind the wheel of Betty, I raced with all deliberate speed towards my local Shoppers, blood lust steeling my nerves against the weather. 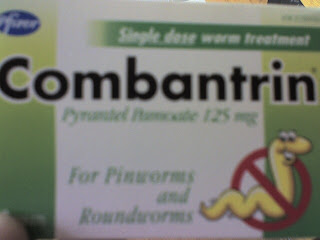 Smile all you want, you little bastard! You're about to go meet your Maker--and I sure as hell hope it isn't the same guy who made me, because I'll be some pissed off if miserable little bastards like pinworms get into heaven.

Because of my size, relative to the average Combantrin consumer (dirty children), I had to eat half the box. That night, though uncomfortable as I was, I slept well--the screams of pinworms acting as my lullaby.

Open letter to any and all pinworms with big enough balls to take on my anus again: I still have half a box of Combantrin, so bring it, bitches! I will send you straight to hell--on the express train I like to call, My Morning Dump. In the words of Iron Mike Tyson, I will eat your children!

You know, I almost immediately regretted writing that; it was likely eating their children that got me sick in the first place.
Posted by B at 5/03/2007

I don't feel so bad about confessing my pant wetting on my blog now.

Give me pee-pee pants any day of the week--it would be like a beautiful vacation from myself.

I think I still have tape worm medication from when our cat was sick - you could've called us up for some help...

...not that I would have scratched your ass or anything like that!

Tape worm!?
I wish I had tape worms! You know how good a diet that is?
Ass worms are certainly no tape worms--no ma'am.

our good friend, Captain Fartlek, was interested in your pin worms... she is a weird person, she likes to dig through shit and stuff like that to figure out what ails you

The Captain needs a new hobby.

Choda? I call it a chin rest.