The Wonders of Pert Plus continue. . . 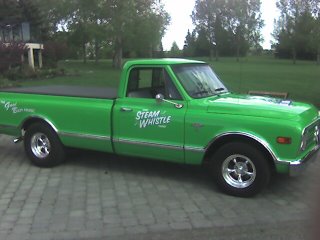 With the 21st Century phenomena of a cell phone in every hand, I've realised that social habits on the mean streets of Calgary have changed.
It used to be that if you were talking to someone, a third party wouldn't interrupt the conversation until: 1) the first conversation was finished; or 2) the third party was invited to join in on the fun.

Yesterday I was on the phone while parked in my '68 Chevy Pickup Truck (it's a very bright, Steam Whistle green) with someone who I'm not wholly familiar, nor they me, and one of Cowtown's colourful Bottle Depot crackheads approached my open window for a chat.

Now, I have a Palm Treo, which is the size of a sandwich, and is impossible to miss when it's pressed against my ear. Let alone the fact that my hand is up around my head, which can only mean two things, really: 1) I'm on the phone; or 2) I've been hit in the ear with a spitball.

But the fact that I was otherwise engaged didn't stop this admirer from interrupting my call:

And with that, he raced off to join his buddies, who were Bogarting a joint on him.

I had to explain to the gal on the other end of the phone that my life is divided into three equal parts: selling beer; sleeping; and talking to everyone and their Uncle Kevin about my truck.

Oh--and sometimes I'm saving the universe from blond alien bombshells who are trying to take over the world by sleeping with college boys. (Look for Decoys 2:Rebirth--Coming soon!)
Posted by B at 6/15/2006