Two nights ago I was leaving a beauty of a honky tonk bar here in Calgary when I bumped into a guy on the sidewalk who said:

G- "Check out what they're selling at the Sony Store across the street! Read the sign!"

I always do as random drunks ask, and this was my reward: 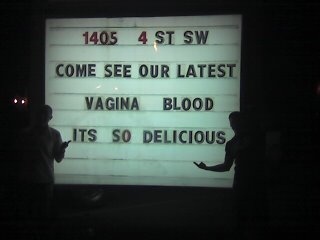 What elevates this sign mutilation from mediocre sophomorish humour to brilliance is the last statement: "Its so delicious".

Believe it or not (and you may not) but just after I took this photo a kid drove past on the street, stopped, leaned out his window and said:

C- "How ironic. I have vagina blood on my boxers right now."

We were Doubting Thomases, but the kid produced boxers which, sure as God made little green apples, appeared to have vaginal blood on them. . . that, or he had a serious bladder infection.

My newfound drunk friends took these bloody boxers and stuck them up on the sign; the kismet of the situation was too irresistible.

For a second there, Lilly, I thought you had said "Yum!", and I was going to be, like, EW!

But my eyes were playing tricks on me. You didn't say Yum.